Determining Whether You Need A Diesel Or Gas Generator 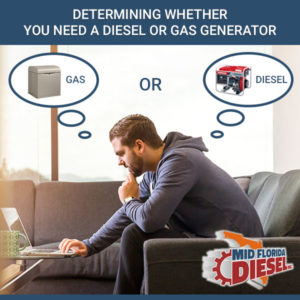 When you’re ready to choose a generator, regardless of the reason why you need it, you’ll need to choose between diesel generators and gas generators. Both types of generators have distinct advantages so you will need to determine where your personal preferences lie. You’ll also need to look at things like cost, reliability, whether the fuel source is available, emission regulations, and whether diesel or gas better fits your needs.

There are both pros and cons to using gas generators. Let’s look at the cons first:

You’ll see that these are outnumbered by the pros, which include:

There are many great advantages to using diesel generators. These include:

Regardless of your choice, you must also consider maintenance. You don’t want to face unscheduled down time or have it take longer than you’d expect to have routine maintenance performed. Additionally, it’s important for you to know how to efficiently run the generator so that it lasts a long time.

Whether you’ve already decided you need diesel generators or gas generators or you still need some help making this decision, Mid Florida Diesel has you covered. They’ve helped many people over the years and there’s no reason you shouldn’t ask for their help too.