The line of Northern Lights generators received its name because of its reputable history, it’s known as one of the most efficient marine generator sets out there right now and can 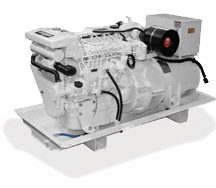 power even the most complicated of operations in the dark. They have an entire line dedicated to 60 and 60 Hz marine generator sets, so if you’re in the marked for a marine generator you’ll probably know which one to look into after you read this. They carry ones from 4.5 all the way up

to 500 kW, and they’re powered by Lugger diesels. They’re well reputed amongst the industry because they get the job done with ease, they’ve been tested and tried on many different fishing boats (and even yachts or passenger boats), so there’s no way you’ll be disappointed. Quality and efficiency are two words you can associate with Northern Lights Generators, that’s for sure!