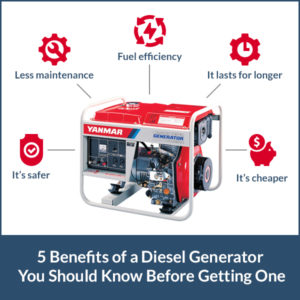 There’s no doubt that diesel generators can be a great investment, as they are way better when compared with petrol generators. However, we bet that there are a lot of people out there, interested in buying one but still have a few doubts. After all, we’re talking about a serious investment, right?

If you’re among them, then you’re in the right place. Big fans of diesel generators ourselves, we’ve put together a list with five of the most important benefits these…devices have, hoping to convince you that they’re worth every penny.

This is pretty much the biggest advantage of a diesel generator! The efficiency we’re referring to translates to a longer running time at full capacity, but this is not everything. Some models can consume up to half as much fuel as similar petrol-running ones.

It is well known that diesel-powered engines usually require less maintenance than petrol engines and this principle also applies to generators.

This happens because they are not equipped with spark plugs or carburetors, so there’s no need to replace the plugs from time to time or rebuild carburetors in case they fail. On the other side, there’s one mandatory condition to have a diesel engine that functions properly: change the oil regularly.

It lasts for longer

Ever saw a car with more than 500.000 miles on the dashboard and running like brand new? Well, it probably had a diesel engine, maintained regularly. Overall, in terms of lifespan, a diesel generator is much more lasting, when compared to a typical petrol model.

Depending on the type of environment in which you’re using the generator, there are certain risks you need to consider. After all, we’re talking about an electrical device here!

The good thing about diesel fuel is that it’s safer to work with, having a reduced risk of ignition, when compared to petrol.

Last but not least, let’s not forget about the financial part of using a diesel generator: the fuel is cheaper than petrol, meaning that such a generator is cheaper to run. Simple as that.

Of course, despite all these advantages, it doesn’t mean that getting a generator running on diesel doesn’t have its minuses.

First thing first, it’s louder and if it doesn’t come with soundproof casing, this can be annoying, especially if you’re using one for longer. Also, servicing can be expensive sometimes and they are less environmentally friendly, generating more emissions than petrol engines. In the end, it’s up to you to decide if these minuses can influence your buying decision.

If you still can’t decide if you should pick one or not, Mid Florida Diesel can help you with all the information you need. With more than 25 years of specializing in the sale and service of engines, generators, and switchgear, it’s more than obvious that they are an authority when it comes to anything powered by diesel!