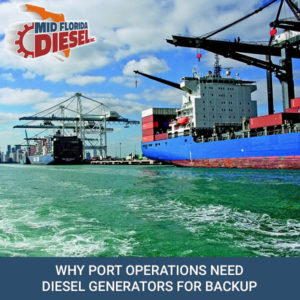 Diesel generators will often come to the rescue when one of America’s ports is faced with a disaster. This is a great way to keep ports working, which is beneficial to both the businesses and the economy in general. The American Association of Port Authorities (AAPA) backs this with much of the research they’ve done over the years.

Keeping America’s ports operating smoothly requires them to have a continual supply of electricity. This is something that diesel generators provide. They can do this while reducing both costs and risks – something that’s important because when severe weather events (e.g. hurricanes) hit they can cost $18 billion – $35 billion. Fortunately, businesses don’t have to lose so much money because downtime can be mitigated in such a way that an outage’s economic impact is no longer nearly as severe as it was in the past.

Today there are many options when it comes to technology and the different types of fuel that are available. Many of these options work well when you’re in need of emergency backup power. However, it’s important to realize that diesel is the only technology that can pick up a full load within just seconds of when an outage first occurs. In fact, it only takes about 10 seconds at most for this to occur whereas with other types of fuel it can take as long as two minutes. In most emergency situations when time is money, this is a waste of too much time. It’s also important to mention that this isn’t within compliance of state and federal laws either.

Time and money aren’t the only benefits here. The fact that these generators are also fully transportable and accessible is also very beneficial. This means that they can be delivered to almost any location, even those that are really remote, which is why almost every community relies on them for powering their schools, hospitals, police stations, fire stations, wastewater treatment facilities, courts, and shelters just to name a few of the many locations.

Examples of Diesel Generators in Action

There are many times that diesel generators have been used to help areas overcome the issues outages can bring with them. Some prime examples of this occurring include:

Mid Florida Diesel should be your “go to” destination for diesel generators. They’ve helped many businesses get up and running quickly after a natural disaster has struck. You should value your business enough to make sure it’s next on their list of businesses being serviced today.