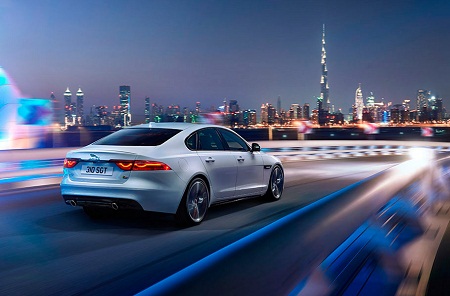 The market for a midsize luxury sedan which has all-wheel drive (AWD) and runs on diesel is a very limited and niche market with very limited options. A new market entrant has people in this market very excited though- the Jaguar XF 20d. It starts at $49,245 and comes in the 2015 redesign which really makes it an attractive and competitive offer in its class. The new 2017 version offers an 180-hp, four-cylinder turbodiesel engine. The car comes with active safety technology and AWD is an option.

The diesel engine, while it may sound underwhelming, can pack quite the punch because the car is 408 pounds lighter than the Audi AD TDI, which is a key competitor. It goes from 0 to 60 miles per hour in 7.9 seconds. The 2-liter diesel’s exhaust is acceptable considering it is diesel and much better than a Mack truck or 80s Oldsmobile.

Moving to the interior of the car, it is quite exquisite. The vents actually camouflage behind panels when the air conditioning is not running, creating a very interesting and pleasing dash look. The shift knob also disappears when the engine is turned off, creating an almost eerie feeling when the car is off. But it is very luxurious, for sure. The start-stop button pulses as if it were a beating heart, adding a unique life quality to the vehicle. These touches are now really a staple of Jaguar’s identity.

One of the other really neat features about the interior is the new touchscreen system which has some very cool features. These include memory for your commute which can be used to route you out of the way of traffic on your daily commutes. It can also look for nearby parking including garages and play apps from your phone. It also includes a lot of the standard features that we see with these in-line entertainment systems these days including connectivity for your phone, GPS capabilities, satellite radio, etc. It does not, however, contain Android Auto or CarPlay compatibility, which might be a downside for some buyers.

There is also a full color LED screen behind the steering wheel which is customizable and can show the typical vehicle settings and information as well as a full map, which is neat. The Jaguar team really did a great job with the interior making it almost like you aren’t even in a car when it is turned off.

Overall, whether or not the Jaguar XF 20d Diesel is a good buy for you depends on what is important to you. The Audi A6 diesel is a formidable competitor and may deserve consideration as well. The best thing to do is real to hit the dealerships and try to test drive the cars you are interested and then to go from there. At the end of the day, a lot of it comes down to personal preference and what is important to you as a driver and traveler. No doubt, that if you go with anything in this class, you will end up with plenty of power and luxury.