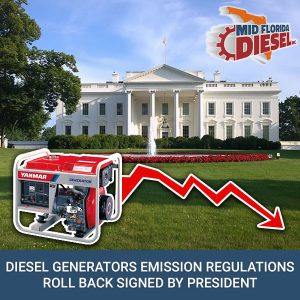 This ruling will reduce some of President Obama’s management of diesel generators. This bill, which is known as the “Alaska Remote Generator Reliability and Protection Act” may decrease emissions per Dave Messier.

Messier, Tanana Chief Conference rural energy administration, stated that this bill will help communities by allowing them to burn cleaner fuel that is more efficient in these diesel generators. This, in turn, will not increase the amount to rural ratepayers. It will also reduce the emissions in power plants located in villages in Alaska.

Prior regulations stated that any new diesel generator installed needed to have a Diesel Particulate Filter. With this, it was found that the generators were much less reliable and costs were driven up by 50%. Messier stated that Alaskan towns that have generators are a safety issue if they go out. Traffic lights stop working, hospitals and clinics are not able to be open, and it takes a toll on human life in general. An example he provided was the town of Nikolai, where $4,000 was spent on a half an hour fix simply to travel a long distance to examine the faulty language of the system. Additionally, repair costs were incurred.

United States politician Dan Sullivan and Alaska Legislator Dan Young made all citizens familiar with the new bill. Sullivan stated that before this legislation was signed, Alaskan towns remained confined with federal laws which were troublesome to their neighborhoods. Reliable and cost-effective electricity were an issue for many. He then went on to praise President Trump for endorsing the new legislation, saying that residents of the state will now be allowed to warm their houses without worrying about safety.

Young said with the passing of this bill, it was a huge triumph for the people of Alaska. His office said in a news statement that close to 100% of all power utilized in Alaskan towns is furnished by diesel fuel. There were difficulties with the current regulations in isolated regions of the state.

EPA will likewise need to communicate with Congress on opportunities that the federal government has to help distant parts of Alaska so they too many meet all energy needs. These needs should be met in a manner that is not only affordable but reliable. A prime example of this is Arctic Village. Currently, they are paying $1 per kilowatt-hour. This is 5 times more what Anchorage is paying.

Diesel generators can provide great relief to not only those that live in Alaska but anywhere in the world. The benefits of owning one far outweigh not having one. They care economical and require very low maintenance. Diesel generators also are very safe to use when there are disasters or accidents. If you are interested in learning more about these generators or wish to purchase one yourself, contact a professional service, such as Mid Florida Diesel.