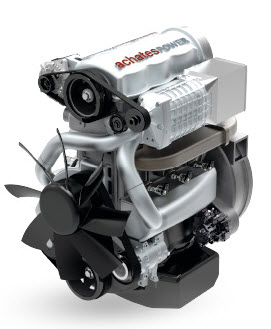 All isn’t said and done just yet in the engine wars. While a number of companies led by Elon Musk’s Tesla attempt to build up the critically-acclaimed battery-powered engine industry, there is innovation happening in the world of combustion engines as well. Achates Power has developed a new technology which reduces the size of the internal combustion engine, improving efficiency and making it more competitive with even the higher end battery powered engines.

Achates has some serious backing in its venture with investments from John Walton and a grant from the United States Department of Energy. The company will be working to develop a 3-cylinder, 3-liter opposed piston gasoline compression engine. What this means in layman’s terms is an engine that could improve fuel efficiency by 50% or more in larger sized cars including SUVs and pickup trucks.

The opposed piston engines have two pistons for each cylinder which are connected by a crankshaft. They work in opposing directions so less heat is lost in the combustion process compared to traditional engines. It does this while being able to produce a comparable amount of energy to a traditional engine. This means that you get the gas efficiency without losing the power (something which is sometimes a concern with certain battery powered engines). The Achates engine would also reduce emissions of harmful gases into the atmosphere, making it more environmentally friendly than traditional engines.

The current development program is expected to span 30 months and involves a collaboration with 2 other groups. One of these groups is Delphi, which is an expert in gasoline compression injection systems. The other is Argonne which focuses on single cylinder engines. The technical expertise of three groups will be combined in attempting to achieve their lofty goals in the 30-month window.

The Achates project is still in early stages with most of the focus currently on research and development, but it is expected to progress fast due to the resources involved. And the endpoint could not come soon enough. On the heels of the Volkswagen emissions scandal and continuing worries about climate change and fossil fuels, the world needs more efficient energy sources all around. An improvement in combustion engines would certainly be welcome even as battery-powered engines continue to grow in popularity because traditional engines are not going to drop-off overnight, especially in big vehicles and this is really where Achates’ project may have a large impact. With about $100 million in venture capital and support from the government, many are looking for Achates to bring about a true breakthrough in the combustion engine space and one that would hopefully make the world a better place to live while also being tremendously lucrative for investors in the company. As Tesla, BMW, Nissan and other big brands continue to tinker with electric and hybrid engines, we should all be just as excited about the work that Achates is doing in this space as the impact overall could be just as great. Exciting times are about!

This entry was posted in New Technology, News and tagged Achates Power. Bookmark the permalink.
Posted on December 28, 2015 by owner