The New Age Of RVs

RVs are just as popular now as they’ve ever been. Sure, there has been years that have seen highs and lows in the sales of RVs but Americans are never going to give up these fun vehicles no matter what. In that vein we need to look at this fascination with these vehicles as well as RV maintenance.

RVs or Recreational Vehicles have been around for decades. They’ve been so popular that even the oldest models are still sought after and can be seen driving down the roads. People love the idea of having a vehicle that has a living quarter attached to it. The old RVs are nothing in comparison regarding to amenities of today’s RVs but it’s still that feeling of comfort and independence that makes these vehicles so popular.

Today’s RVs have just about everything the modern home has. Add to that availability of WiFi and you can’t beat today’s RVs The use of WiFi now makes the RV an attraction to millennials and seniors too. Families love the convenience of bringing their laptops and tablets and other WiFi devices along and today’s at-home worker can hop into their RV and work from any area the RV can travel to.

The new RVs have microwaves, showers, washing machines and dryers, and lots of living space. They can easily accommodate a family of four or more and they can be parked in designated RV parks that are found nationwide. Cities and towns with RV parks see a rise in tourism and revenue. Normally they’re found outside of the municipalities but you can pull up, register, plug your RV into an electrical or plumbing and just rest for as long as it’s allowed. 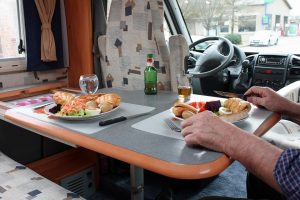 Since the popularity of these vehicles has grown over the past 10 years, the RV companies have been busy figuring out how to make these vehicles more accommodating and withing an affordable cost range. Matter of fact, it’s much cheaper to own an RV if you’re one of the new online work at home people. They may cost a good penny but stretched out it’s far cheaper than renting or a mortgage. As long as you have a regular snail mail address you’re good to go. You can travel from one end of the country to the other and not have to worry about raking leaves, mowing lawns, or shoveling snow.

You get to meet people all over and attend festivals and outdoor events all in the comfort of your own space.

On the highways you are riding and living like a king. Other people are trapped in cars and if nature calls they have to hope they’ll get to a restroom. Not so with an RV.

This is why during evacuations during disasters, the RV is the vehicle to have. You can get as far as possible from the disaster and carry tons of supplies and belongings.

Overall, you won’t be missing out on owning your own RV.

If you own an RV and you need it repaired or maintenance then there’s no company better than Mid Florida Diesel. They know all about RVs and what puts the wear and tear on these vehicles. You’ll be able to know that your Rv will be up and running in top condition.